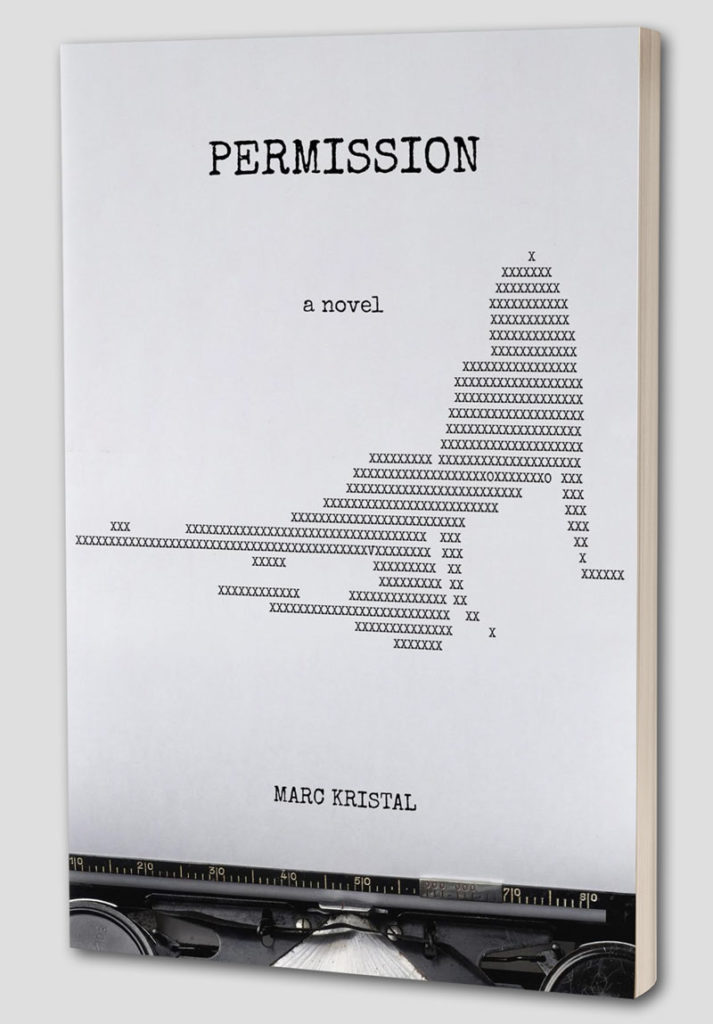 Set in the crime-, riot-, and earthquake-racked Los Angeles of the 1990s, Permission tells the story of a screenwriter on the brink of success, derailed by a destructive marriage that drives him into a breakdown. Medicating his condition with a bottomless plunge into prostitutes and cocaine (his unlikely vehicles for self-analysis and personal revelation) he uses what he learns—and the new relationship he finds in this underworld—to come to terms with his nature, and to change his life.

Comic and horrific, shockingly explicit yet tender and lyrical, Permission is more than a sex-and-drug-fueled fever dream—more than a portrait of L.A., the movies, and of a marriage. Rather, Marc Kristal’s uncompromising, unforgettable first novel is about the ways in which we create identities that let us overcome and hide from our fears, what happens when those selves crash into their limits—and how the worst sort of chaos can lead, in the end, to the best outcome.

Published by Atmosphere Press, Permission is available on Amazon.com and via order from your local bookstore.

One might think another literary romp with booze, coke, and prostitutes is the last thing we need; in a world that has, by now, transgressed in just about every way possible, such stories feel superfluous. But in the Nabokovian noir of his new novel, Permission, Marc Kristal tells it all in a way we’ve never quite experienced before: with surgical precision, unpreachy humility, and continuous insight.
—Gabriel Hart, Los Angeles Review of Books

Reading Marc Kristal’s novel, Permission, has been an enriching experience for me both because it has an engrossing story to tell and it is masterfully written—lyrical, humorous, and erudite. I wholeheartedly recommend it.
—Gay Talese, author

They don’t write ’em like Permission anymore. Kristal’s biting, beautiful, sex-soaked novel of a screenwriter’s unraveling is as bluntly masculine as it is bookishly cultured… louche but glittering, impolite but incisive, as hung up on words as it is on sex, always written with rare brio and clarity… Vividly detailed, shot through with heartache, and slicingly funny about the humiliations of life as a screenwriter… Permission will thrill lovers of old-school, id-driven literary novels.

The book’s protracted anatomy of drug- and alcohol-fueled deconstruction is immensely insightful and powerful… Kristal writes this dramatic and seedy deterioration with incredible vibrancy and linguistic virtuosity… The dissection of a disintegrating marriage in these pages is unsettlingly vivid, as is the portrait of degradation brought on by addiction. The fact that the narrator somehow remains likable throughout is as remarkable as it is unexpected… A searingly moving picture of a personal, professional, and marital crackup.
—Kirkus Reviews

Permission is a multifaceted, startling novel. The writing about an unhappy marriage could be from a new F. Scott Fitzgerald, and James Salter would be nodding approvingly at the sex scenes, raw, sweaty and lewd. Marc Kristal can find the joke in both the mundane and the philosophical—and seeks the truth in every aspect of human behavior, no matter the price.
—Michael Lindsay-Hogg, director, Let It Be, The Normal Heart

Deeply satisfying, often great, and with an originality that sneaks up on you… One of the most specific and convincing accounts of a marriage—the horrors and the joys—I have ever read… The depictions of prostitutes and prostitution are sympathetic and pitiless, all of it to a serious and profound effect. An experienced traveler’s guide to the inner precincts of eros and even love.
—Henry Bean, screenwriter, Internal Affairs, writer-director, The Believer

ON PERMISSION
when you look in the mirror you are looking at me,
following the still fresh tracks
from the always downtown of my NY to
the nightmare desert of LA and back
“what can i add to the literature of los angeles? only the personal”
sometimes that’s enough
—Abel Ferrara, director, Bad Lieutenant, King of New York 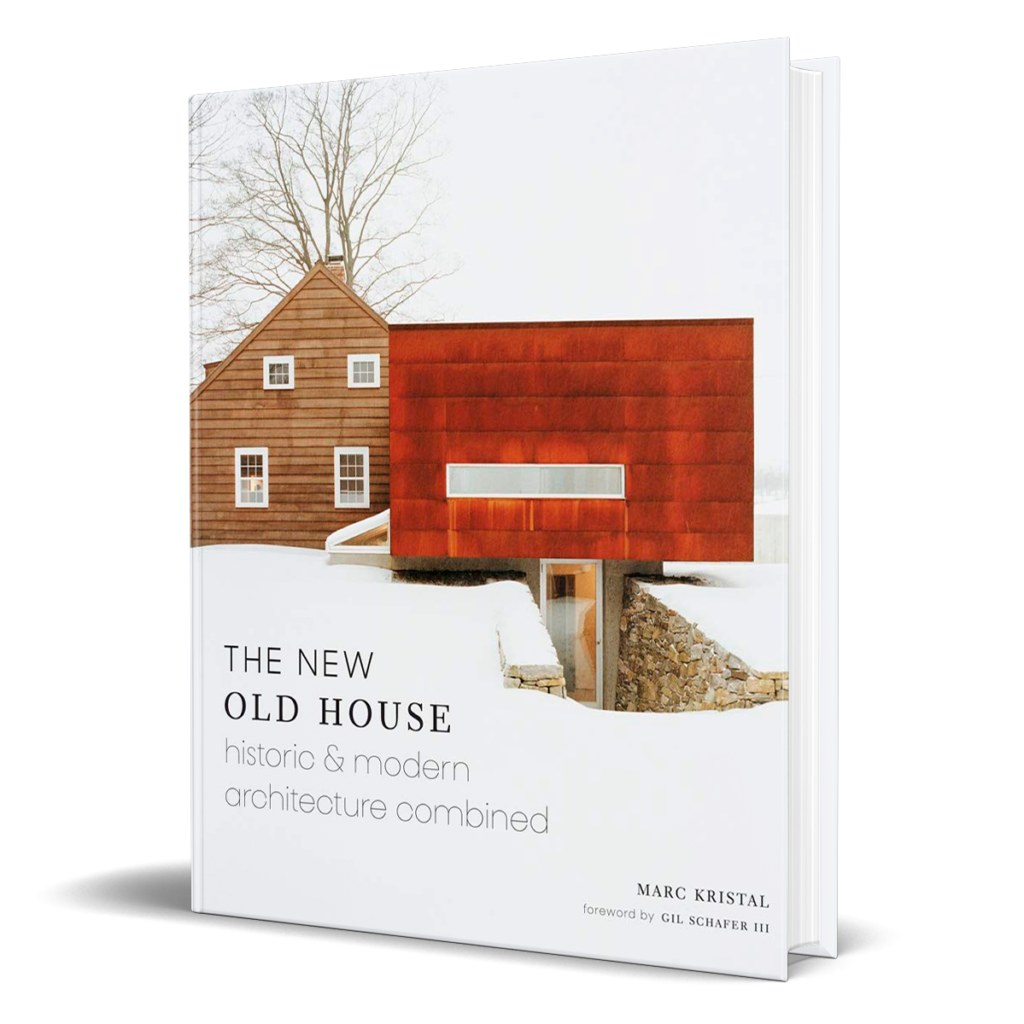 The New Old House presents 18 private historic homes, from North America to Europe, and traces the ingenious ways architects have revitalized and refreshed them for a new generation.

Most of the renovations occurred in the last decade, but all of the homes have origins reaching back into the past, in some cases hundreds of years. Projects and firms featured include Greenwich House, Allan Greenberg; Longbranch, Jim Olson; Astley Castle, Witherford Watson Mann; Hunsett Mill, Acme; Cotswolds House, Richard Found; plus more than a dozen others. These projects address such timely factors as sustainability, multiculturalism, preservation, and style, and demonstrate the unique beauty and elegance that comes from the interweaving of modernity and history.

A book that deftly stresses the best-of-both-worlds approach that underlies a tasteful renovation.
―Monocle

The 18 private historic houses featured in this book certainly draw you in, illustrating just how brilliant and intriguing integrating new and old can be.
―New York magazine’s The Cut.com

It’s easy to be drawn to an old building’s charm and character, but the reality is, a historic residence is not typically synonymous with easy modern living. In the new book The New Old House, design reporter Marc Kristal shows us how architects are taking timeworn properties and reinventing them with bold contemporary additions… Kristal tours a curated collection of such houses around the world, all more compelling—and more livable—than they were before their transformations.
―Architectural Digest

Kristal’s book also goes far beyond the average coffee table tome, in that project descriptions are rich with insider insight and a genuine interest in the history and processes that shaped each project.… The New Old House is a very welcome insight into a strand of architecture that deserves far more than second-tier status.
―Wallpaper* magazine

…a sumptuous, inspiring collection of homes that fuse past and present in the US, UK and Puerto Rico (and including Lorcan O’Herlihy’s renovation and adaptation of the Raphael Soriano-designed home of the late Julius Shulman).
―KCRW

As a filmmaker, the writer Marc Kristal is a natural story teller, which enlivens his 18 case studies about adding contemporary additions to old houses.
―Architectural Record

Showcasing everything from a converted mill cottage in Norfolk to a modernized warehouse in Alabama, it is also packed with inspirational ways of adding space to an old property.
―Homes & Gardens

An interesting perspective on timeless houses, which have been revamped and used for other purposes, The New Old House traces the inventive methods used by architects to revitalize old buildings.”
—50 Architecture Books that Every Architect Should Read, Arch2O

Kristal’s book is the No. 1 New Release in Energy Efficient Remodeling &Renovation at Amazon, where it also ranks among the Top 20 Best Sellers in the same category. The New Old House has been featured in numerous global magazines, including Architectural Digest, Monocle and Wallpaper, which called it “a very welcome insight into a strand of architecture that deserves far more than second-tier status.”
―The Florida Times-Union

Kristal’s text is not particularly predictable or “coffee-table” in style…. the book has a real, personal quality that gives its judgments a further dimension.
―The World of Interiors

In his book The New Old House: Historic & Modern Architecture Combined, Marc Kristal features homes that have beautifully blended new and old architecture, and demonstrates how to change up your own historic home by introducing modern fixtures.
―American Farmhouse Style magazine

Ranging from fancy to simple, castle to cottage, the book demonstrates that even things to which we’re not naturally attracted can have rich and powerful appeal.
―Carolyne Roehm 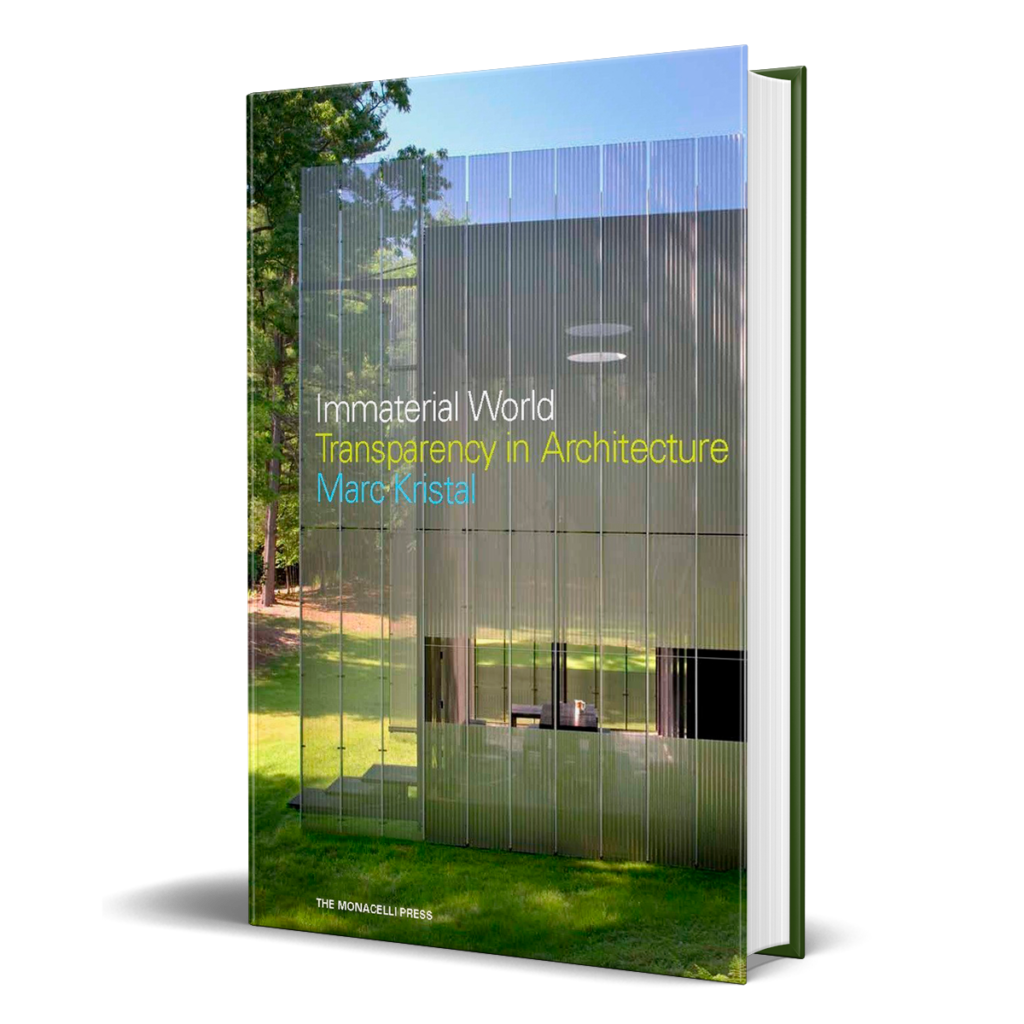 Today the excitement in architecture derives from the tension between the need for privacy and the impulse toward community. This unique survey of buildings and interiors captures the multilayered experience that is engaged whenever we look out of—or into—a work of architecture.

Immaterial World examines the built environment as a reflection of the terrors and pleasures of exposure, information overload, and abundance of every sort. Twenty-five projects from around the world by such well-known architects as Diller Scofidio + Renfro, Morphosis, Christian de Portzamparc, Renzo Piano, and many others, are presented. These works range from complete transparency to bunkerlike opacity, depending upon who’s doing the looking and who or what is being seen.

Rare is the book that makes one look at buildings in an entirely fresh way, but Marc Kristal has achieved that goal in this critical study.
—FORM Magazine

Marc Kristal has created just the right kind of introductory overview to recent trends in architectural transparency… The photography is first-rate, the writing sharply entertaining and informative.
—ArchNewsNow

Now more than ever, architects and designers are crossing aesthetic borders, and redefining craft to suit their own creative needs, philosophies, and expectations—often by commenting upon or challenging it. By transforming our notions of what might be considered “crafted,” today’s practitioners have not only put a new spin on an ancient art; they have expanded our understanding of where and how the personal touch is found in the sometimes bewildering or inhospitable terrain of the contemporary aesthetic landscape.

Featuring twenty-five residential, commercial, and institutional projects—by major international design figures as well as the relatively unknown and up-and-coming—this volume looks at what constitutes the craft influence in contemporary architecture and design. By turns luxurious and simple; time-honored and leading-edge; small-scale and monumental; unabashedly beautiful, surprisingly witty, socially adroit, and sublimely poetic, these projects are sure to give us a new appreciation of the pleasures of making—and enlarge and enrich our understanding of the presence, and importance, of craft in all our lives.

We were instantly drawn to the subject, the featured talent, the handsome photography as well as the smart writing… An excellent resource and certainly worth adding to your own design library.
—Design Therapy